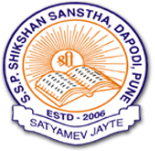 Ganesh International School, Chikhali , Pune
On 18th October 2022,Tuesday, School had organized Prize Distribution for Fort Making Activity in school. On this occasion Guest Lecture was organized in the school to know the importance of forts in ruling the empire, to know the glorious past of Maratha Empire which was founded by The Great Maratha king Chhatrapati Shivaji Maharaj along with the mavlas. The Guest speaker Dr. Pramod Borade explained how often we are using the simple words that are taken from  Farsi language. Words like door, windows, lock and key and fort are taken from Farsi. He explained how Shivaji  Maharaj encouraged the people to use the Marathi language based on Sanskrit, through his  work. Further he explained to the students about various forts and advised them to visit forts. Students, staff and management  were enlightened by his speech. He also spread awareness about social values with great examples of history. Prize was distributed to students for making the best forts. Academic Coordinator Mr. Shewale sir, Mr. Gaikwad sir, Principal Mrs. Shilpa Gaikwad,
Vice Principal Mrs Ashvini Mam & Co Ordinator  Mrs Padmashree Mam Mr. More sir was present for the program. Student’s efforts were appreciated by the Guest, Teachers, parents  and Management.